I have been supporting for the last six years a programme for single mothers at risk of abandoning their children in Moldova, run by a local NGO called Diaconia http://www.diaconia.md. The programme is called “In Bratele Mamei”/”In Mother’s arms”. My support was mainly through donations and participation at their fund-raising events. I once hosted a Charity Tea for them; made the cause known to my network of friends and colleagues at home and abroad; donated my fare-well gift courtesy of my previous team to them. Nothing major.

It’s a cause dear to my heart, so i took it with me when i moved to another country. The staff association at my work place organises each year a Christmas Fair for NGOs and local producers inside our buildings. So, the opportunity was there. All i did was to apply on behalf of the Moldovan NGO. And the NGO was admitted along with other 12 participants.

Their objectives were two-fold: raise funds and get to be known abroad, to co-nationals in Strasbourg and to the wider international community. I could help them on both. It was a major thing for them, as a first action of this kind outside the country. It turned out to be a very valuable experience for me, with lots of lessons learned.

With the objectives set, in two weeks, we had to sell 500 Christmas decorations, made by volunteers in Moldova. I was told the cost was 4 Euro each and the expectation was to sell for twice the price.

The NGO took care of the transportation, so a week before the Fair, 4 big boxes arrived in my appartement. Organisers offered a table, two chairs and a poster-support to be used at the Fair.

I identified volunteers to sell the items through a Moldovan students network. One of volunteers offered to create a schedule for them to take turns. The pre-fair meeting coffee and tea for all was on me. I printed the leaflets about the cause and the campaign poster for visibility. The NGO created a facebook page to be able to spread the word.

Boxes moved to my office and on the first day me and my husband arranged the stand and waited for the first volunteers. As it was a cause dear to me, i spent my coffee and lunch breaks at the stand. These were the picks of sails.

Lesson nr 1 – people buy from the ones they know or associate themselves with. Personal time and involvement is the main input. It would have been ideal to have NGO members be at the Fair.

My daughter joined us every day after school. She knows the cause and gladly explained to all why we are doing this. Sales went up. Lesson nr 2 – people buy when explained with children authenticity.

One day sales were modest. Volunteers real commitment is key. Lesson nr 3 – those who claim sales experience and volunteer commitment might not necessarily prove it.

And then there was lesson nr 4 – there is competition among charities for customers. And lesson nr 5 – there is solidarity among Fair participants: we did buy from each other. And then lesson nr 6 – check the market: in one of best Europe’s Christmas markets, it is impossible to compete on the same segment- Christmas decoration. Lesson nr 7 – generally, people buy things they need/like and in few instances the cause is the driver behind the purchase. 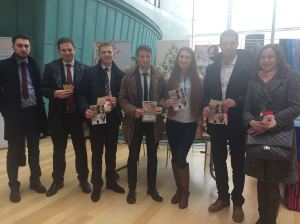 The proceeds collected at the Fair amounted to 23% of the total collected by the entire campaign organized in the country for a month. My testimonials http://diaconia.md/pageview.php?l=ro&idc=480&t=/Campanii/Campania-de-Craciun/Campania-de-Craciun-In-bratele-mamei-2016/Impact. By my standards, it was a partly succesful project and with a low cost-benefit ratio. We sold half the toys and for a little above 5 euro on average by decoration. My and my family time and efforts, covering 50% of time at the stand and on local PR, is an unaccounted investment. I thought to myself that it would have been so much easier to just donate the money. It gave us as a family a great joint experience, it is true. I witnessed beautiful acts of solidarity among my friends and colleagues. But it was not about us, but about the single mothers and their babies.

I concluded the experience with “think cost-benefit” as my new challenge, for the effort to provide a meaningful support to causes dear to my heart.